Education for A Brighter Future

School is a luxury in the village of Saga, Metamani District, South Sorong, West Papua.  In this village most children drop out of school after completing elementary or junior high school.  Yuliana Tinopi is concerned about the low awareness of the importance of education.

The 33-year-old mother who sells various household needs for a living then established an early childhood education center in February 2015. She believes that the love of learning should be cultivated since a young age.  The school, PAUD Ceria, uses the village meeting room and is open every day between 9-11 AM.

Yuliana, affectionately known as Bunda Lili (Mother Lili), did not expect an enthusiastic response. Sixty children between the ages of two to six registered for the school. Then they were divided based on their age. Class A is for the 2-4 age group and Class B is for 4-6 age group.

Besides Lili, other neighborhood moms joined to teach the children. Lili became more motivated when PT Austindo Nusantara Jaya Tbk visited the school to donate educational supplies such as books and chalkboards.

Lili hopes PAUD Ceria teachers will have assistance for teacher training programs. “We only have teaching spirit but our teaching skill is limited,” said Lili who is a high school graduate.

By cultivating love for education to children from an early age, she hopes her pupils will be motivated to pursue a higher-level education. She also added, only through education will the future of Saga Village children be brighter than that of their predecessors. 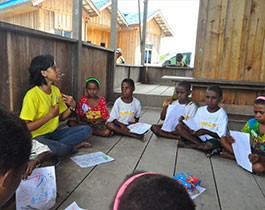 Towards A Self-Reliant Community 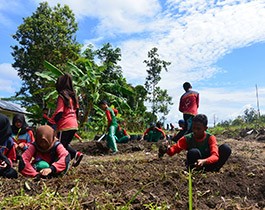 As a company that is committed to elevating people’s lives, PT Sahabat Mewah dan Makmur (SMM) values education as a basic foundation to build an ideal community. It also aligns with the Company’s mission to empower the community as equal partners. 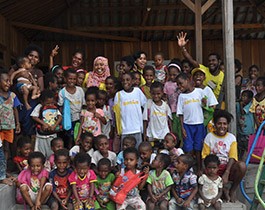