Partnering and Doing Business Together

On 21 April 2016, the members and board of LMS Cooperative did not take much time to choose a chief. Yermias, the Cooperative Chief of the first period was chosen again for the next three year leadership. According to him, the meeting ran smoothly without any rumble because of the perfect preparation.

LMS Cooperative is a corporate coaching and partner of PT Kayung Agro Lestari (KAL), a subsidiary of PT Austindo Nusantara Jaya Tbk operated at Ketapang, West Kalimantan. The Cooperative is managing partnership plantation of PT KAL. The Cooperative has yet to receive income from fresh fruit bunches sales. Therefore, Yermias is utilizing another income to pay the wages of the board and running the Cooperative. The income comes from transport fee, contracting fee, and material procurement from PT KAL.

In the report, Yermias described that IDR196,685,477 or 86% of the income was spent to cover operational expenses during 2015. Nevertheless, the Plantation Agency granted an A score to LMS Cooperative in 2011. “Supports from PT KAL in the form of policy and coaching is very important for us,” said Yermias. 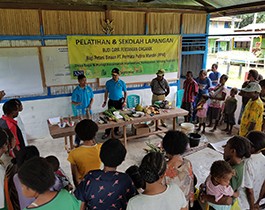