Dedication in the Remote Area

Apple does not fall far from the tree. Just like his father who worked as a doctor in a plantation company, Erwan Taufik walked the same path after graduated from Medical Faculty of Islamic University of North Sumatra in 2006. He applied to a company in Pangkalan Kerinci, Riau.

After 7 years, on June 2013, he joined PT Austindo Nusantara Jaya Agri Siais (ANJA Siais) in Padang Sidempuan, South Tapanuli, 14 hours travel by bus from Medan. At that time, the health clinic was not a permanent building but a container. Erwan managed the clinic establishment from its licence and permit to the physical development of the building.

Every day, Erwan takes care of about 20-40 patients from the Company’s employees, their families, and the community from three villages in Padang Sidempuan. Although the health care cost is on the Company’s account, ANJA Siais managed some of the people in the community to get Badan Penyelenggara Jaminan Sosial (BPJS) so they can get health insurance from the government.

Before there were physician in the area of ANJA Siais plantation, the local community was not familiar with professional health care practitioner. Usually, they went to the village’s midwife. There were funny moments in the early days when Erwan is practicing. “There’s a patient who ran away because he was afraid of getting a shot,” he said. “I was only about to examine him.”

Two nurses and two midwives help Erwan in daily practice. If a patient is not strong enough to come to the clinic, Erwan will use the ambulance to visit him/her. The health practice is free of charge. ANJA Siais provides medical instruments and medicines from Medan every three months.

Once a month, Erwan return home to get together with his wife and two toddlers in Medan. “Sometimes, I take them to the plantation on holiday,” he said. 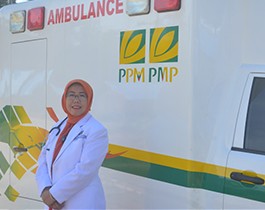 Born and raised in Jakarta, Naurah Zainar Aufaira has dreamt to work as a physician for the poor in remote area that she would need to use a boat through thick river to go to her patient’s house. She decided to study at Medicine Faculty of Trisakti University where she graduated at 1998.